This is the plane my dad and my uncle Herb flew in WWII. You can read below of Uncle Herb's exploits before he was killed. He received the Distinguished Flying Cross, Air Medal and 4 Purple Hearts. He was featured in the Saturday Evening Post which came out 7 days after his death
Click on the photo to go to Mark's page to see more.

The Chino 2006 Air Show Highlights
This link thanks to fighter pilot aces Tom Bradley & Tex Byrd ...
Pals of mine and Mel Nethery's

Here is a poem by Father D. E. O' Brian that we can thank Sailor (Don E Ballard) for sending me!

When done with this page 1

This site is dedicated Uncle Herb Hempe, Dick Rouse (a pilot friend of Herbs that now lives here in Redding CA), Uncle Paul Hempe, (Career USAF) , my Grandfather Frederick Hempe (Hippe) & my dad Carl Hempe, US Cavalry Cadet Corps (his release papers to the Army Air Corps signed by Colonel Patton) . The family name changed to Hempe from Hippe in Germany when my grandad Frederick immigrated to the USA. (We legally still have the E also - I leave it off so it will be pronounced properly) The Hempe family has a rich military history spanning a couple of century's from Germany to our present day in the USA. I (Doc Hempe)was a Capt. in the USAF 1968 - 1970 (tooth jockey)& our son Kevin fought in Desert Storm One as a special ops Marine with General Boomer Also (click here) his book Hogweed Comics

Frederick Hempe (who lost 9 brothers in WW1 fighting for Germany) was a high ranking officer in the German army during the first world war. He was an engineer. He was instrumental in developing the first submarines. He was captured by the allies - spent time in a prisoner of war camp in upper state New York State, was sprung by the German underground - picked up by a German U boat (submarine) returned to Germany. He liked what he saw of the USA and after the war immigrated here with his family. (he played in the Philadelphia Philharmonic orchestra). His great? Grandfather (somewhere back when) was a supposedly a general under Frederick the Great ... Some family folk lore passed down the generations.
The pictures immediately following are of Herbert Hempe - He fought as a US Pilot in the China theater in WW II under Major General Chennault with the Army Air Corps (so he didn't have to fight against our many cousins etc. in Germany). He flew a B25 Mitchell, was on his 2nd tour of duty (I think) as a pilot when he was killed. He was featured in the Saturday Evening Post Nov. 20, 1943 & received 3 purple hearts, the Distinguished Flying Cross & the Air Medal. He once brought the "Gladys D" back smoking, at tree top level on one engine barely running and an hour late with every crew member wounded including himself. The whole base stood out cheering them home! My dad says the plane had hundreds of bullet holes in it! After getting himself patched up he immediately went back out with another plane & crew & sunk the ship that shot them up.
Herb was Killed 9 days before the Saturday Evening Post article hit the news stands. HEMPE (HIPPE) FAMILY TREE By William G Gerkin - family historian! For all you little Hempsters scattered around the world! Also see Photos of Herb futher below here in this page.

This Site is our memorial to ALL those that have died & fought in all our wars to keep us free so we can have web pages etc. like this!!!!!!!!! They are the REAL HEROS! (Not Billionaire sports, News &Hollywood figures!) - LET US NOT FORGET THOSE THAT DIED!

Dick Rouse who now lives right here in our home town & Uncle Herb delivered their B-25's & crews together from their training base in the USA over the Hump when they joined Chennault. Dick showed me the military paperwork. Dick was there when Herb & his crew were shot down. Dick - only 7 days later was also shot down, crash landed & heroically pulled many wounded crew members from his burning plane suffering burns to his face & hands. They were promptly captured by the Japanese & spent the rest of the war in a very unpleasant Japanese prison camp.

I have letters that Herb sent home and a one from his friend and commander Colonel Maury Taber and another buddy that sent letters back home after Herb was killed .. I plan on posting these this winter 2010.


Herb center & Lt. Hardin (photo operations) left, going over the maps before a bombing run. I think Dick Rouse is on the right. 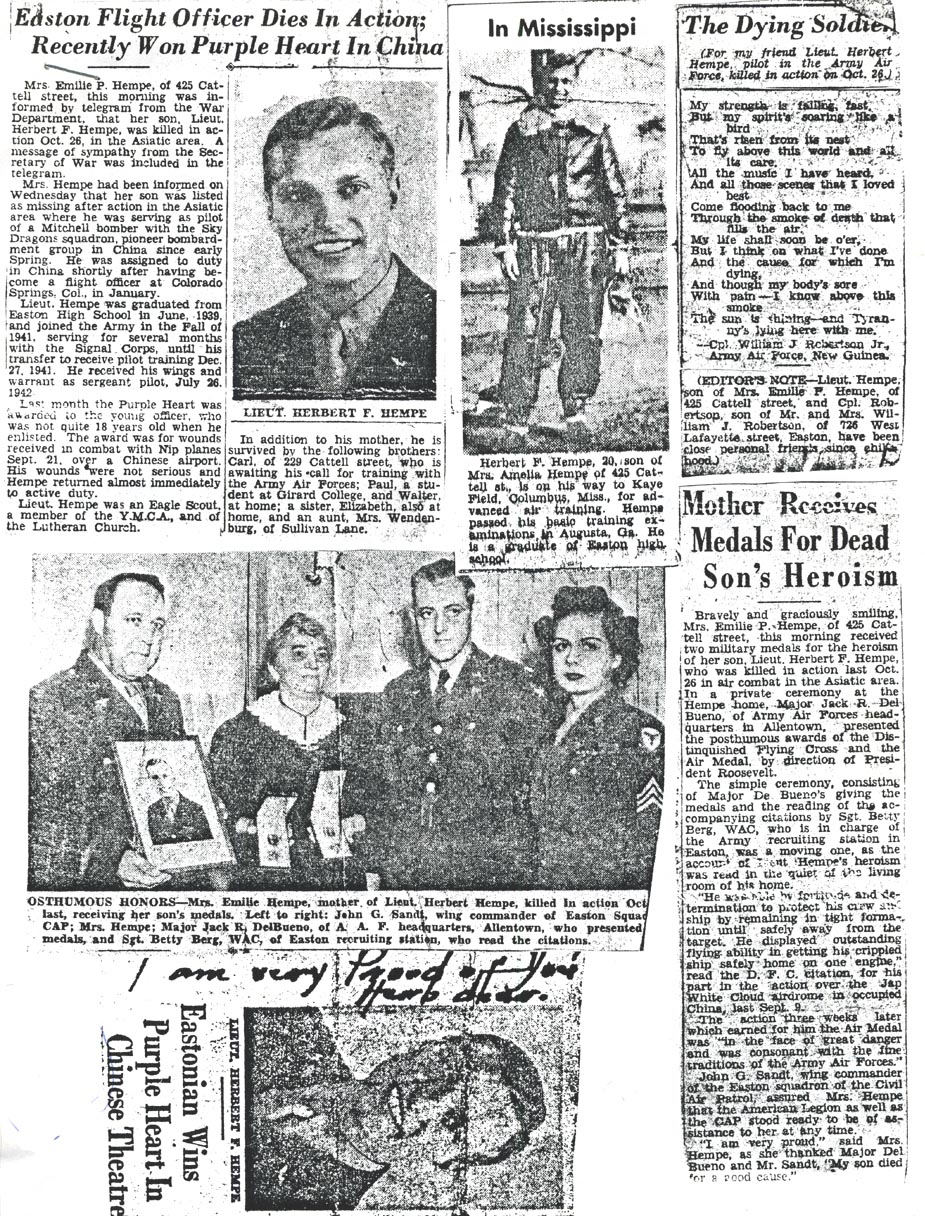 My dad Carl Hempe on the day he received his wings in the Army Air Corps. He is in the plane indicated.
My dad won America's Finest Physique in 1939 .... It was the 1st national body building plus strength (3 olympic lifts) contest and became known as the "Mr. America Contest". They had 3 height catagories in 1939 .... Tall, Medium & Short. Dad won the medium height catagory.

He was also the base middle weight boxing champion in the Army Air Corps. And my Uncle Herb was better than he was! It was from my dad I learned my shooting (& youthful brawling - hee-hee) skills & why I have a shooting range at our ranch to this day. He won Hi Civilian at Quanico VA in the 50's with a perfect score of 100 with 10x's on one of his 25yard targets. While attending college in Tacoma Park in the 50's he worked at the capital for Senator Duff right across the hall from Senator John F Kennedy who he got to know & like very well!
He was also very instrumental in getting World Boxing Champion George Foreman into boxing while dad was head of the Job Corps in Pittsburgh, CA. He was also a huge part of the Contra Costa County Sheriff's Posse for 20 some years!!! He has recently had several strokes & is very feeble at age 79. (update 11/24/05 he is now 85) Carl Henry Saxon Hempe, Please click here for more on dad & see the special recognition that the state of California honored him with!
My Dad passed away when he was 86.


Another WWII Pilot (the late) Captain Bob Gates USN flying in a Stearmen trainer 1940, Bob is (was) a patient & a very good friend of ours & Rich & Michele Lincoln! Michele is our office manager.

Bob Gates in an aircraft carrier OS2U Kingfisher! This plane was catapulted off the battle ships & landed on the ocean & was hoisted back up on deck again if they came back. (was fondly called the Kamikaze plane as it was a slow observation plane sent out to find ships!) 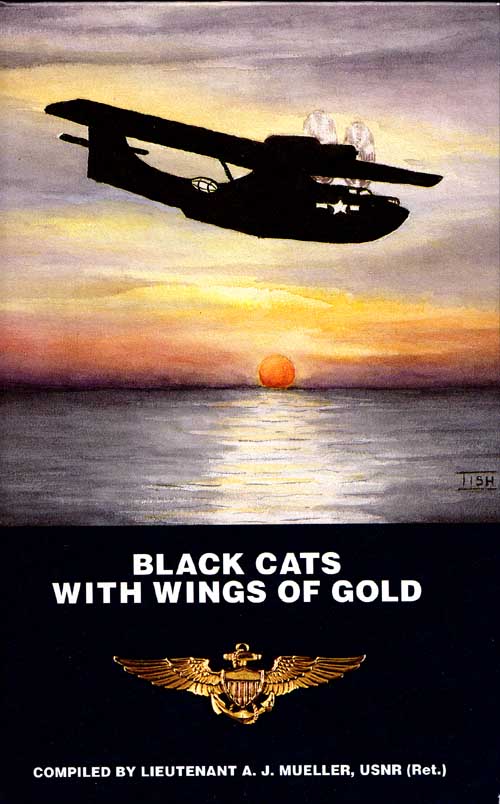 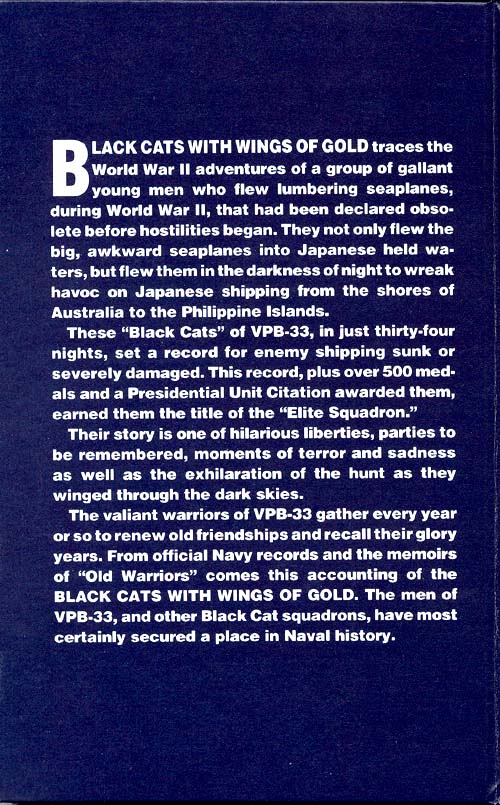 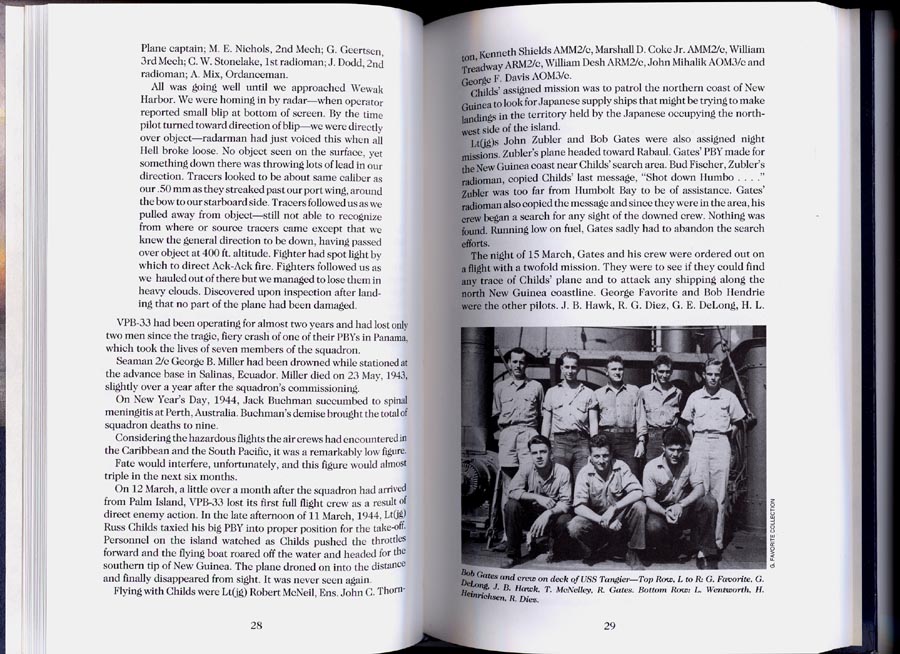 I would like to thank Mel Nethery for these above original photos too ... I asked our friend Thorne Stallings to identify them ... he had personally flown 248 different aircraft in his career! .. and a Harley Rider ... what else can I say!? ... We have a page of his own you can reach from our airplane page 2. Also order his 2 novels he has written there.

Doc, the aircraft flying are TBM's, Curtis Torpedo Bombers and the same type George Bush was shot down in during the war. They were used extensively in and around Missoula, MT in the 60's for Borate Bombers on Fire Patrol.

The ones sitting out on the ramp are Grumman F4 Wildcats. They were the main stay of the Navy carrier fleet during the first part of the war. Followed thereafter by the vastly superior Grumman F6 Hellcat, and later the Chance Vought Corsair F4U. During the very end of the war (last 4 months I believe) Grumman also produced the F8F Bearcat and it saw little combat. By the time Korea rolled around the Navy was using a jet called the Panther, and a prop plane called the Douglas Skyraider. The F8F's Bearcats are seen a lot now at the Reno Air Races in modified form, along with the P-51's. (grin) Bad ass airplanes...Yep dey is! Easy to fly, if you know how to fly. (grin again) Raw power pulling around a fantastic gun platform.

Note: The second answer to your question: The SBD was the Douglas Dive Bomber and achieved most of it's fame at Midway. The early Sub hunters were PBY's, then P2V's through Korea. They had 2 jet engines and two R2800 Radial engines. The current sub hunters (and hurricane hunters) are P3's. A derivative of the Lockheed Electra. I have about 1500 hours in those. Good airplane.


Below is a rare photo (given to me by my good friend Mel Nethery) of a B 17 still flying with the rest of the crew aboard, but were able to bail out I am told.

9/15/10 Update Great Email we Received today ... I have invited William to send me some photos of him and his brother.